CCC and Morrison Camp in the News

In October, Colorado Public Radio published a new story asking “Is It Time For A 21st-Century Civilian Conservation Corps?” Our answer has always been a resounding “YES!” Reactivating a CCC-style program has long been on the agenda of alumni groups nationwide, and Denver’s Chapter 7 was active in supporting and promoting the concept.

The article by Sam Brasch includes his interview with DMP Ranger Gwen Ganow, who updated him on developments at the Mt. Morrison Camp (SP-13) where DMP is headquartered. Jacob Ware, chief of Elk Creek Fire Protection District near Conifer, provided further thoughts on how a new federal CCC-inspired program of national service could help with fire mitigation in his area. 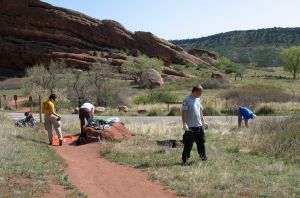 Denver Mountain Parks, whose extensive involvement with the 1930s CCC influenced most of its parks, has also continued partnering with organizations that have followed the CCC legacy. Since its inception in 1993, AmeriCorps NCCC (National Civilian Community Corps) teams have worked for Mountain Parks refurbishing historic buildings, thinning forests, building new structures and trails, and even pulling weeds. Locally based Mile High Youth Corps has also been actively involved in DMP projects over the years.

As the alumni groups have been telling us since the 1990s, it’s time to “Bring Back the CCCs”!

CCC author Bob Audretsch recently experienced horrible flooding in his Lakewood, CO, apartment. Many original CCC references were lost, along with furniture and personal items. Bob has set up a Go-Fund-Me account to help him recover.

Here’s Bob’s Amazon bio, which summarizes his available books. He recently completed a 2-volume set on Colorado. On the way to press is his book on the CCC in Wyoming. He’s asking a modest amount to help get up and running so he can get the Wyoming book to his publisher. I hope we can all chip in any amount to help him continue to create these important reference books, an asset to genealogists as well as CCC enthusiasts and historians.

Of course, if you can spread the word, that would also be much appreciated!

If you can, please help!Thank you!!

Good news! There’s going to be a book on the Colorado CCC!!

For two years, author Bob Audretsch has been researching here and across Colorado, collecting material for his book on the CCC efforts here in our state. And we’ve been helping as best we can. A lot has happened in the last two years, and I need to write a major update, but for now, let’s just settle for this announcement. We hope the book will be available in the next year or so.

Bob’s book will become the go-to source for information on CCC work projects statewide. Among other sources, he’s been reviewing local newspapers around the area. They often reported what the CCC boys were doing in the small towns and remote forests of our state, and Bob is uncovering a treasure trove of information there. Bob has been sharing information with us as he goes along (and vice versa)!

Bob has already published books on the CCC in Arizona, where he was a ranger and interpreter at Grand Canyon National Park for many years. He moved to Colorado in 2014. We’ll share more on Bob’s Colorado work and discoveries soon.

Shaping the Park and Saving the Boys
The Civilian Conservation Corps at Grand Canyon, 1933-1942

Located at the bottom of Grand Canyon along the Colorado River, Phantom Ranch was designed by architect Mary Jane Colter in 1921 and can only be reached by hiking, mule ride or river trip.
2012. 128 pages. 206 b&w photos. $21.99 paper.

We Still Walk In Their Footprint
The Civilian Conservation Corps in Northern Arizona, 1933-1942