Over the years, we and our visitors have puzzled over the mysterious mural behind the stage in the Recreation Hall at Camp SP-13, Morrison. Some of the mystery was resolved several years ago, when a friend connected us with John Stencel, who formerly served as president of the Rocky Mountain Farmers’ Union. 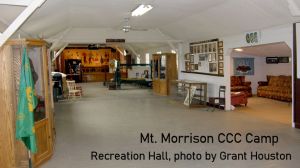 By 2008, Chapter 7 alumni were wrapping up their long use of the Morrison Camp, but wanted Denver Mountain Parks to continue hosting a display of artifacts they’d collected. The Rec Hall still houses their museum today. An Open House was held there on August 10, 2019, with about 500 people attending.

The Red Rocks camp (CCC) brings back many wonderful memories. I attended Farmers Union Camp at Red Rocks as a boy in the 1950s. In 1959, National Farmers Union purchased the old Bailey Ranch and built their own facility, now known as the Farmers Union Education Center, near Bailey, Colorado. Starting in 1960, I was a camp counselor at Bailey and then in 1964, I helped conduct camps at Bailey. Sorry for the side-bar, but it helps me with time frames. 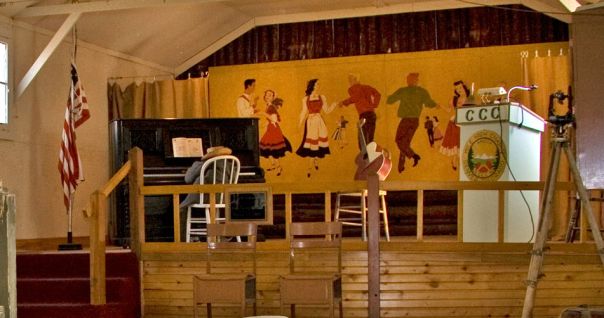 Closer view of the Farmers Union mural at the back of the stage. The stage is set up as it was for the Chapter 7 alumni meetings, with podium and chapter seal.

I remember the mural on the wall that you are talking about… Square and Round dancing was always a part of the evening activities. I can’t give you a date on when it was painted, but it had to be in the mid-1950s. I remember it appearing one year when I returned to camp in the mid ’50s, when I was in high school. We always had a co-op store where we sold candy and soda pop and souvenirs. Profits from the co-op were used to buy something for the camp. Perhaps the All-Staters decided to use their profits to paint the mural. I am just guessing this, but it is a possibility.

Named in honor of Alumni Chapter 7, this organization was formed to recognize and celebrate the history and accomplishments of the Civilian Conservation Corps, and later its alumni, in Colorado, and to assist in identifying, conserving, and interpreting the historic and cultural resources associated with their projects, especially Mt. Morrison CCC Camp SP-13.
View all posts by mhch7 »

Posted on October 8, 2019, in history, morrison camp. Bookmark the permalink. Leave a comment.