Did you know the Mt. Morrison CCC Camp is, as far as we can determine, the most intact surviving camp in Colorado? You can arrange to tour the camp by contacting Denver Mountain Parks (leave a message at 720.865.0900.) 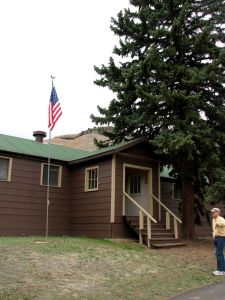 The weekend of April 13-14, 2013, was “Doors Open Denver,” a major event downtown featuring 80 participating sites for visitors to explore. One of the sites this past weekend was the Mount Morrison Civilian Conservation Corps camp. More often called simply “CCC,” this program of the 1930s put 3 million men nationwide to work over the course of its 9.5 year life.

More than 265 people visited the CCC camp in Morrison during the weekend.

Two buildings, the Recreation Hall (shown here, with its museum of original CCC artifacts) and the Mess Hall (dedicated to the alumni and their efforts), were open to the public. 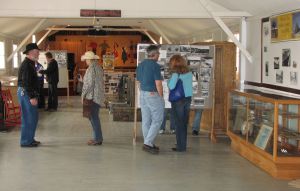 The Chapter 7 Alumni, of the National Association of CCC Alumni, used these buildings for about 25 years after helping Mountain Parks staff renovate them in the early 1980s.

Repeatedly visitors said “I had no idea this was here!” Yes, the camp is a well kept secret, but the word is out to a larger group now than ever before. There was a lot of interest and a great number of questions! The other big emphasis was “Why isn’t this open more often?” 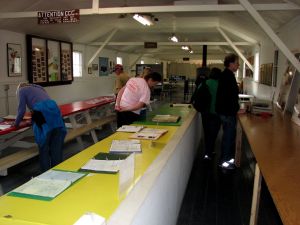 (DOD was held there in 2008, but most had missed it.) Tours are available by appointment (email mountainparks AT gmail DOT com or call 720.865.0900), and it’s possible a few more open houses will happen this summer, so keep in touch.

Many Denver people dropped in, but so did people from Aurora, Broomfield, Thornton, Highlands Ranch, and Oak Creek, wherever that is. And one each from Salida, Estes Park, Cheyenne WY, and Fairlawn NJ! A few people who had come here as Girl Scouts or Peace Corps trainees, or who were relatives of CCC men, also came. The Camp was used as a Scout camp and for other groups in the 1940s through 1960s.

Volunteers Jamee, John, and Jim from Mile High Chapter 7 helped keep the doors open all weekend, and talked to guests who were very interested in learning more about this fascinating site, where you can experience what life might have been like for the 3 million men who were enrolled in this program during the 1930s.