Note: The following post is an edited summary of a report received in 2014 from Grant Houston, editor of the Lake City newspaper Silver City World. He notes that his interest and appreciation for CCC architecture was ignited as a result of the tour of the Morrison CCC camp several years earlier. Apparently we never received photos of this project, but we’re including a few from Denver Mountain Parks files as examples.

By Grant Houston
A while back I mentioned I’d located two 18′ long, 7′ wide rustic-style log CCC outhouses which had been saved from demolition in the 1960s and put up on blocks in a virtually inaccessible area at 30-Mile Resort, a mile or so below Rio Grande Reservoir on the Upper Rio Grande River in Hinsdale County. I had discussions with Rio Grande National Forest officials and received permission that one of the outhouses would be donated to Hinsdale County Museum and moved to the Lake City museum after we decided how the structure might safely be moved.

In the meantime, last June, the Papoose Wildfire burned something like 70,000 acres on the Upper Rio Grande. The entire upper valley area, including 30-Mile Resort, was evacuated. We received reports that both CCC outhouses had probably burned in the fire. Our county commissioners had by this time taken an interest in the outhouses and knew that we had planned to move one of the structures to Lake City. Through their efforts a wildfire fighting crew was sent in and installed a firewall trench separating the outhouses from the hillside where the fire was blazing. In the end— and quite miraculously— the wildfire burned to within a couple feet of the outhouses but was stopped by a timely aerial dump of fire retardant and the trench.

On October 31, Hinsdale County Historical Society worked with Hinsdale County Road & Bridge Dept. to hoist one of the outhouses onto a flatbed, strap it into place and trundle it over both Spring Creek Pass and Slumgullion Pass to a concrete slab which had been prepared on the grounds at Hinsdale County Museum. The other CCC outhouse remains at 30-Mile Resort with plans by Rio Grande National Forest to relocate and restore it at its original location in the adjacent 30-Mile Forest Service Campground. 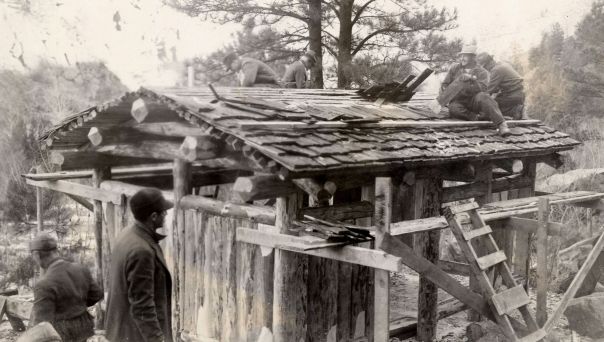 A CCC-era outhouse nearing completion in the Denver Mountain Parks.

We’re planning to restore the outhouse as an outdoor display at the museum highlighting Hinsdale County’s Depression-era economy, efforts by the CCC in the county, and the beginnings of rustic style architecture which is now so prevalent in these mountain communities. The outhouse had two-over-two windows, and there are remnants of a snowflake-patterned window glass originally installed. Only a few shards of the original glass remain and [we’re hoping] to obtain window glass similar to this original pattern. The outhouse is in darn good condition for its age— we’ve researched and believe it was constructed assembly-line fashion at the South Fork CCC camp about 1940, then disassembled and re-erected at the 30-Mile Campground. Log outhouses from the South Fork camp were sent all over the state, an extant and identical example is at Seed House Campground near Steamboat Springs. 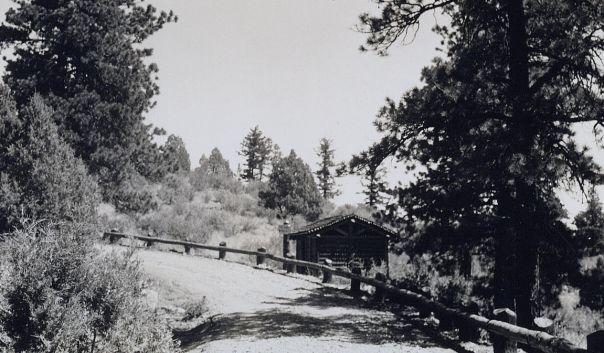 A CCC vintage original outhouse survives in Genesee Park, as of 2015. 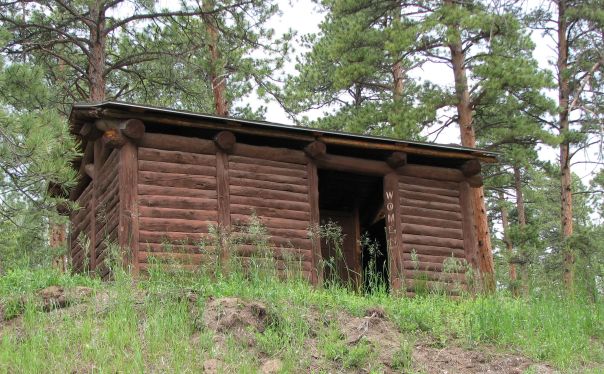 This CCC latrine still stood in Dedisse Park as of 2009.

Named in honor of Alumni Chapter 7, this organization was formed to recognize and celebrate the history and accomplishments of the Civilian Conservation Corps, and later its alumni, in Colorado, and to assist in identifying, conserving, and interpreting the historic and cultural resources associated with their projects, especially Mt. Morrison CCC Camp SP-13.
View all posts by mhch7 »

Posted on October 6, 2019, in historic preservation. Bookmark the permalink. Leave a comment.